For the second run of this event, see Temporal Misalignment 2 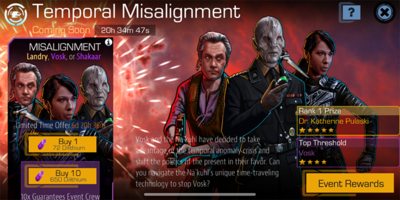 Vosk and the Na'kuhl have decided to take advantage of the temporal anomaly crisis and shift the politics of the present in their favor. Can you navigate the Na'kuhl's unique time-traveling technology to stop Vosk?

The first phase functions as a Faction Event, with players completing shuttle missions for the Federation or the Bajorans. These missions will drop Victory Points, which unlock Threshold Rewards.

Time travelers from the future have taken an interest in the temporal anomaly crisis. Vosk of the Na’kuhl arrives to begin stirring up animosity between existing factions in an attempt to point history in the Na’kuhl’s favor. [1]