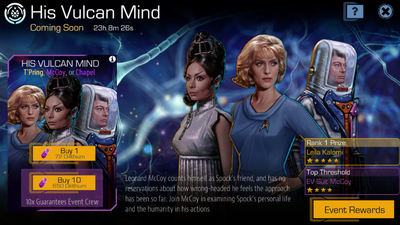 Leonard McCoy counts himself as Spock's friend, and has no reservations about how wrong-headed he feels the approach has been so far. Join McCoy in examining Spock's personal life and the humanity in his actions.

For the second phase of the event, the Bajorans, the Hirogen and the Klingon Empire competed against each other.

His Vulcan Mind is the third of 4 events in the Mega Event Spocktober.

Though McCoy has clashed with Spock over the years, he also counts himself as Spock’s friend, and is convinced you are going about this the completely wrong way. Chapel and T’Pring, who also care deeply for Spock, concur, and suggest you focus your efforts on delving into Spock’s personal life, finding others who affected him strongly, and who might have the power to influence him towards such an illogical path. [1]