For the second run of this event, see For Charity 2 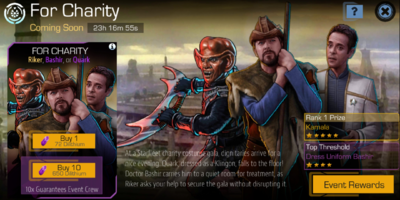 At a Starfleet charity costume gala, dignitaries arrive for a nice evening. Quark, dressed as a Klingon, falls to the floor! Doctor Bashir carries him to a quiet room for treatment, as Riker asks your help to secure the gala without disrupting it.

For the second phase of the event, the Federation, Ferengi Alliance and the Ferengi Traditionalists will be competing against each other.

The Federation is hosting an important holiday costume ball to benefit refugee children across the galaxy. Guests from all cultures and areas are present. Quark, dressed as a Klingon, suddenly falls to the ground. [1]