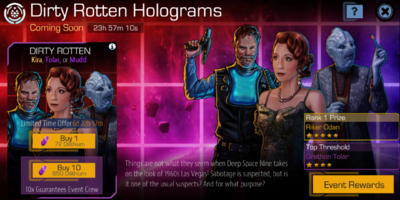 Things are not what they seem when Deep Space Nine takes on the look of 1960s Las Vegas! Sabotage is suspected, but is it one of the usual suspects? And for what purpose?

For the second phase of the event, the Cardassian Union, Romulan Star Empire, and Ferengi Alliance will be competing against each other.

Things are not what they seem aboard Deep Space Nine when the entire space station suddenly takes on the appearance of Las Vegas during Earth’s 1960s, with different rooms and businesses appearing as building interiors from the era. [1]