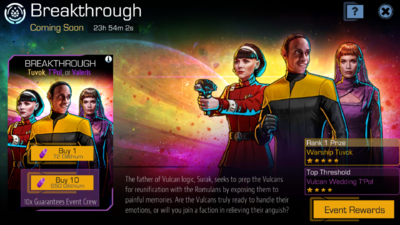 The father of Vulcan logic, Surak, seeks to prep the Vulcans for reunification with the Romulans by exposing them to painful memories. Are the Vulcans truly ready to handle their emotions, or will you join a faction in relieving their anguish?

For the second phase of the event, the Romulan Star Empire, Klingon Empire , and Bajoran will the competing against each other.

Breakthrough is the Second of 4 events in the Mega Event All We Become.

Surak’s announcement has stunned the Vulcan people. Reluctant to challenge the man responsible for the very foundations of their society, they have chosen to approach Surak’s “re-education” with cautious optimism. First, Surak intends to show the Vulcan people that while every emotion has its place, suppressing all emotion only leads to disaster both personal and public later down the road. As he suspects the Vulcans themselves might self-sabotage this effort, he is relying on the vast resources of the Federation to help him see it through. [1]