A Changeling in Time 2

For the first run of this event, see A Changeling In Time 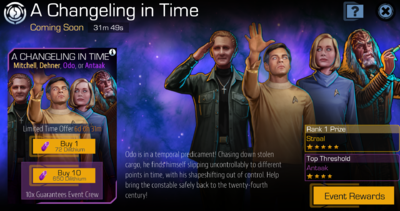 Odo is in a temporal predicament! Chasing down stolen cargo, he finds himself slipping uncontrollably to different points in time, with his shapeshifting out of control. Help bring the constable safely back to the twenty-fourth century!

The first phase functions as a Faction Event, with players completing shuttle missions for Dominion, Klingon Empire, or Federation. These missions will drop Victory Points, which unlock Threshold Rewards.

A Changeling in Time 2 Faction Missions

Odo sends a very difficult to understand distress call - he keeps slipping to different points in time. Not only that, but he has lost control of his shapeshifting abilities! He seems to shift into an appearance reminiscent of the time he ends up in, as something of a subconscious defense mechanism. Will you be able to figure out a way to retrieve Odo before he’s lost to time forever? [1]