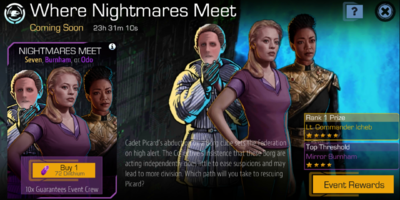 Cadet Picard's abduction by a Borg cube sets the Federation on high alert. The Collective's insistence that these Borg are acting independently does little to ease suspicions and may lead to more division. Which path will you take to rescuing Picard?

The first phase functions as a Faction Event, with players completing shuttle missions for the Borg, the Romulans or the Dominion. These missions will drop Victory Points, which unlock Threshold Rewards.

Where Nightmares Meet was the second of 4 events in the Mega Event Forever As One.

With young Picard captured by a Borg cube following his unfortunate appearance beyond the Neutral Zone, the galaxy is on high alert, particularly the Borg. They insist this cube is not acting at the behest of the Collective. But what does this subset of rogue drones want with the Young Picard? [1]