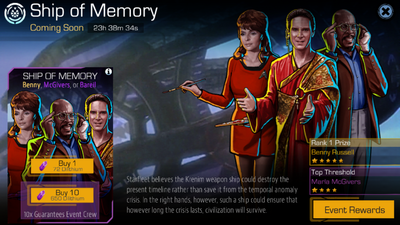 Starfleet believed the Krenim weapon ship could destroy the present timeline rather than save it from the temporal anomaly crisis. In the right hands, however, such a ship could ensure that however long the crisis lasts, civilization will survive.

The Krenim weapon ship is closing on the Alpha Quadrant, and Starfleet fears that the Krenim’s attempts to correct the temporal anomaly crisis could destroy the timeline entirely rather than save it. If the ship can be taken from the Krenim’s hands, however, it could provide a safe haven for the memories and artifacts of the many civilizations threatened by this ongoing crisis. [1]