For the second run of this event, see The Falcon Falls 2 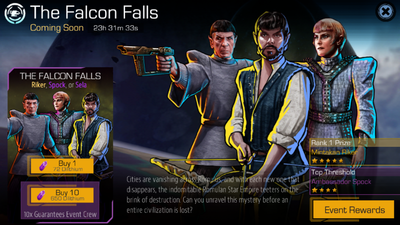 Cities are vanishing across Romulus, and with each new one that disappears, the indomitable Romulan Star Empire teeters on the brink of destruction. Can you unravel this mystery before an entire civilization is lost?

Entire cities on Romulus and its colonies are disappearing as though wiped from existence. As the Romulan Star Empire begins to collapse from within, its people have reached out across the Neutral Zone and asked Starfleet for help. They suspect a temporal anomaly may be responsible for this catastrophe, but if they can’t stop it in time, their once-proud civilization may vanish entirely. [2]