For the first run of this event, see Plague of Plagues 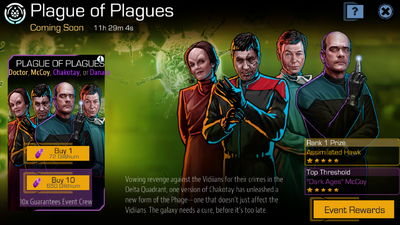 Vowing revenge against the Vidiians for their crimes in the Delta Quadrant, one version of Chakotay has unleashed a new form of the Phage-one that doesn't just affect the Vidiians. The galaxy needs a cure, before it's too late.

For the second phase of the event, the Federation, Dominion and Terran Empire will the competing against each other.

The Vidiians--a Delta Quadrant species afflicted with a disease which drove them to steal organs from other compatible species--have made many enemies in their efforts to save themselves from the Phage. One such enemy, the inaccurate Kyrian version of Chakotay, has vowed vengeance, and unleashed a new form of the Phage which not only affects Vidiians, but also anyone Chakotay views as their allies. [1]