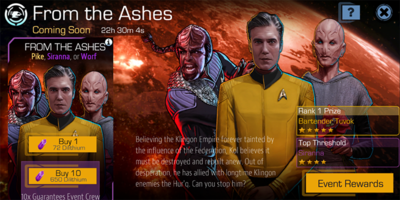 Believing the Klingon Empire forever tainted by the influence of the Federation, Kol believes it must be destroyed and rebuilt anew. Out of desperation, he has allied with longtime Klingon enemies the Hur'q. Can you stop him?

The first phase functions as a Faction Event, with players completing shuttle missions for Section 31, Federation, or Klingon Empire. These missions will drop Victory Points, which unlock Threshold Rewards.

From the Ashes is the Fourth of 4 events in the Mega Event Empire Reforged.

From the Ashes Faction Missions

Still dissatisfied with his own people and furious over the influence he believes the Federation wields over the Empire, Kol decides that the only way to preserve the honor of the Empire is to destroy it and rebuild anew. [1]