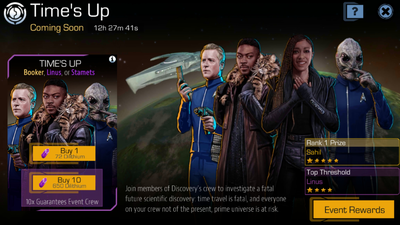 Join members of Discovery's crew to investigate a fatal future scientific discovery: time travel is fatal, and everyone on your crew not of the present, prime universe is at risk.

Time's Up is the first of 4 events in the Mega Event The Cosmic Divide.

Linus, Stamets, and Burnham need your help to investigate rumors that individuals from the mirror universe are falling ill and dying in alarming numbers. Even worse, it appears the Orion Syndicate has been taking advantage of the growing power vacuum in the Terran Empire… and Burnham may not make it back from her undercover mission as a result.