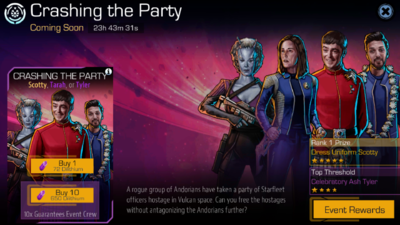 A rogue group of Andorians have taken a party of Starfleet officers hostage in Vulcan space. Can you free the hostages without antagonizing the Andorians further?

For the second phase of the event, the Federation, Section 31, and Ferengi Traditionalists will the competing against each other.

A reception honoring the crew of the U.S.S. Discovery on the restored Vulcan world of Paan Mokar is rudely interrupted when a hostile force of Andorians arrive to retake the planet. Led by the fierce and passionate Tarah--a former member of the Andorian Imperial Guard--the Andorians take the entire reception hostage, using their captives to voice their demands. Can you resolve the standoff without further alienating the Andorians? [1]