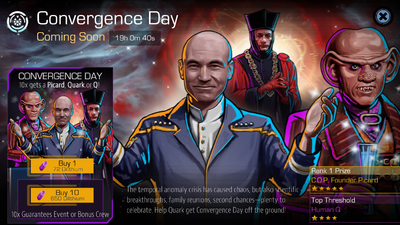 For each mission, certain special items are required which can be assembled from standard components and equipment. To create the item, a crew member with a certain skill must be assigned. The better the skill, the greater the chances of receiving a Quark's Guest List. Bonus crew will greatly improve the odds. For each item creation, as well as for delivering a certain number of Quark's Guest List, the player will receive victory points.

Convergence Day was the first Galaxy Event without Phase 2.

"The Q’s Choice pack is a new collection of crew hand-selected by Q to meet some of the most demanding challenges in the galaxy."[1]

It’s been nearly a standard Earth year since the temporal anomaly crisis began. Despite all the chaos it has caused, there have also been innumerable scientific breakthroughs, the reunion of family and friends with lost loved ones, a second chance for fallen villains and heroes alike. To celebrate all that has been gained, the Federation has declared a new holiday—Convergence Day—and many groups outside the Federation are adopting the holiday as their own as well.[1]