The Weak Will Perish 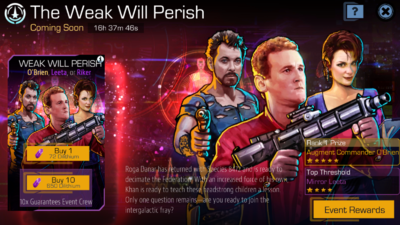 Roga Danar has returned with Species 8472 and is ready to decimate the Federation! With an increased force of his own, Khan is ready to teach these headstrong children a lesson. Only one question remains–are you ready to join the intergalactic fray?

The first phase functions as an Expedition Event.

The second phase functions as a Faction Event, with players completing shuttle missions for Augments. These missions will drop Victory Points, which unlock Threshold Rewards.

The third phase is in the form of a Galaxy Event.

The Weak Will Perish Faction Missions