For the second run of this event, see The Longest Day 2 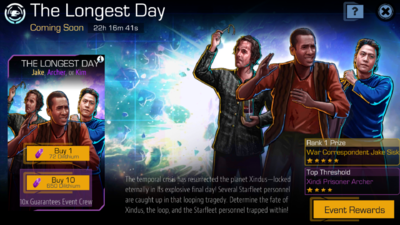 The temporal crisis has resurrected the planet Xindus–locked eternally in its explosive final day! Several Starfleet personnel are caught up in that looping tragedy. Determine the fate of Xindus, the loop, and the Starfleet personnel trapped within!

The first phase functions as a Faction Event, with players completing shuttle missions for the Dominion or Hirogen. These missions will drop Victory Points, which unlock Threshold Rewards.

On the planet of Xindus, resurrected via temporal anomaly, the desperate conflict that eventually led to the planet’s destruction plays out nearly to completion each day… and then resets. Even worse, several displaced Starfleet personnel find themselves trapped in the middle of this perpetually repeating civil war, unable to escape because they forget they are trapped with every new sunrise. Luckily, a version of Harry Kim familiar with temporal loops has figured out what is happening and hopes to find a way to end the loop without losing the Starfleet personnel on the planet. But he’s going to need help. [1]