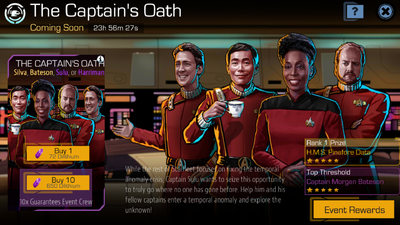 The first phase functions as a Faction Event, with players completing shuttle missions for Federation. These missions will drop Victory Points, which unlock Threshold Rewards.

Captain Sulu, among others, feels Starfleet has been approaching the temporal anomaly crisis with the wrong attitude. Instead of viewing it as a crisis that has to be set right, Starfleet should consider themselves to have entered uncharted space, populated by foreign explorers, and conduct themselves accordingly. [1]