Life, Liberty, and the Pursuit 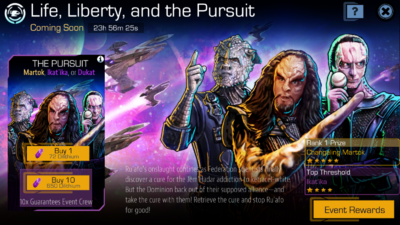 Ru'afo's onslaught continues as Federation scientists finally discover a cure for the Jem'Hadar addiction to ketracel-white. But the Dominion back out of their supposed alliance--and take the cure with them! Retrieve the cure and stop Ru'afo for good!

The first phase functions as a Faction Event, with players completing shuttle missions for Cardassian Union, Klingon Empire, or Federation. These missions will drop Victory Points, which unlock Threshold Rewards.

Life, Liberty, and the Pursuit is the Fourth of 4 events in the Mega Event The Hand That Feeds!.

Though Starfleet forces were able to hold off the Jem’Hadar fleet, and Federation officials believe they have a working cure for the Jem’Hadar’s dependency on ketracel-white, the Dominion has suddenly gotten cold feet. They have taken the cure and fled for the Gamma Quadrant! [1]