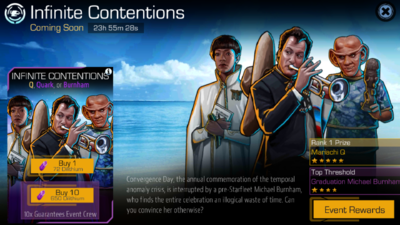 Convergence Day, the annual commemoration of the temporal anomaly crisis, is interrupted by a pre-Starfleet Michael Burnham, who finds the entire celebration an illogical waste of time. Can you convince her otherwise?

Convergence Day celebrations are in full swing when suddenly, the Vulcans show up to ruin the party. Led by a conscientious of Michael Burnham, these Vulcans find Convergence Day a shockingly illogical diversion in the face of the many problems facing the galaxy. Burnham and her followers believe that the galaxy should be singularly focused on resolving the temporal anomaly crisis, and to that end, gang-presses celebrants into more productive roles. With Q only amused at the sight of humorless Vulcans stymying this annual galactic party, it’s up to you to decide how this year’s Convergence Day celebrations will end. [1]