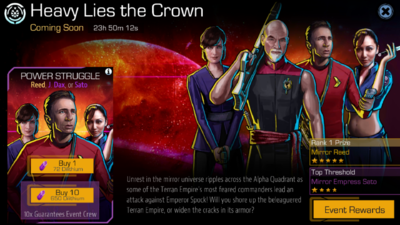 Unrest in the mirror universe ripples across the Alpha Quadrant as some of the Terran Empire's most feared commanders lead an attack against Emperor Spock! Will you shore up the beleaguered Terran Empire, or widen the cracks in its armor?

For the second phase of the event, the Terran Empire, Section 31, and Maquis will the competing against each other.

The Terran Empire is on high alert. A mirror version of Captain Jean-Luc Picard has declared Emperor Spock unfit to rule the Empire. Together with Empress Sato, who has always schemed to reclaim the throne she once held, they sought to make an attempt on the Emperor’s life. But true to form, Sato has decided to betray her partner Picard by informing on him to Starfleet. The immediate threat to Spock must be dealt with. Will you protect Spock by working with Terran Empire authorities, secretly support overthrowing Spock alongside the Maquis, or help Section 31 manipulate both sides into weakening each other? [1]