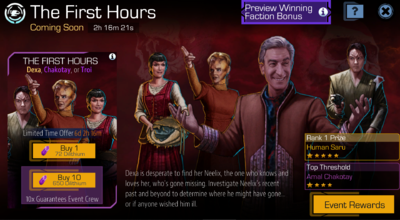 Dexa is desperate to find her Neelix, the one who knows and loves her, who's gone missing. Investigate Neelix's recent past and beyond to determine where he might have gone... or if anyone wished him ill.

The First Hours was a Faction Event beginning Thursday, April 1, 2021 and ending Monday, April 5, 2021. Players could complete shuttle missions for the Federation, Maquis or the Ferengi Traditionalistst. These missions will drop Victory Points, which unlock Threshold Rewards.

The First Hours is the first of 4 events in the Mega Event Masquerade.

Faction mission details can be found in the The First Hours Faction Missions page.

Dexa--Neelix’s Talaxian partner--is desperate with worry. Neelix has gone missing, and no one can find him. Oh, there are many versions of Neelix around, but none of them hers, the one who loves her and left Voyager to be with her. Investigate Neelix’s recent past and beyond to try to determine where he might have gone… or if anyone would have wished him ill.[1]