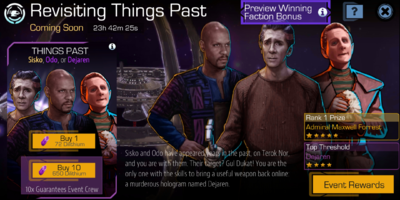 Sisko and Odo have appeared years in the past, on Terok Nor, and you are with them. Their target? Gul Dukat! You are the only one with the skills to bring a useful weapon back online: a murderous hologram named Dejaren.

Revisiting Things Past is a Faction Event beginning Thursday, January 9, 2020 and ending Monday, January 13, 2020. Players can complete shuttle missions for the Federation, the Bajorans, or the Cardassians. These missions will drop Victory Points, which unlock Threshold Rewards.

Sisko and Odo realize that they are once again back on Terok Nor, once more they are rehashing things past...but this time, Dax and Garak are not here. What does this mean? [1]