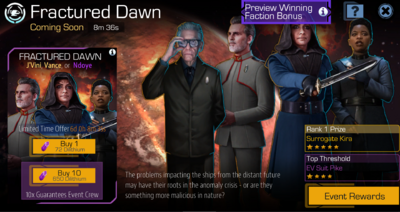 The problems impacting ships from the distant future may have their roots in the anomaly crisis - or are they something more malicious in nature?

Fractured Dawn is the last of four events in the Discovery Mega-Event Uniquely Challenging Times.

Faction mission details can be found in the Fractured Dawn Faction Missions page.

What if the future could be changed? The Temporal Cold War and Burn prevented? Why should those who lost everything be bound by another millennium’s silly little Temporal Accords? As outlandish as that might sound, it’s very much on the minds of more than a few from the distant future - and the consequences could be dire! [1]