Shackled to the Stars 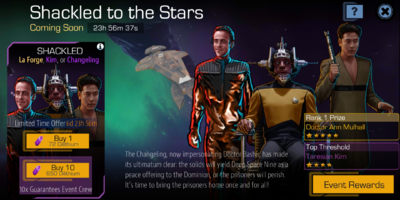 The Changeling, now impersonating Doctor Bashir, has made its ultimatum clear: the solids will yield Deep Space Nine as a peace offering to the Dominion, or the prisoners will perish. It's time to bring the prisoners home once and for all!

Shackled to the Stars is the Final of 4 events in the Mega Event Captive Intent.

The Changeling, taking the form of Doctor Julian Bashir, has unveiled an ultimatum - the Solids will yield Deep Space Nine as an offering to the Founders or the prisoners will die! [1]