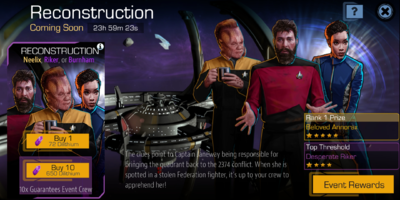 The clues point to Captain Janeway being responsible for bringing the quadrant back to the 2374 conflict. When she is spotted in a stolen Federation fighter, it's up to your crew to apprehend her!

Reconstruction is the Second of 4 events in the Voyager Mega Event Month of Hell.

Clues seem to point to Janeway being somehow involved with the strange temporal incursion causing a reversion to the year 2374... [1]