For the first run of this event, see In Taste Confounds 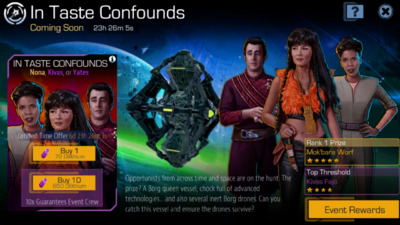 Opportunists from across time and space are on the hunt. The prize? A Borg Queen vessel, chock full of advanced technologies... and also several inert Borg drones. Can you catch this vessel and ensure the drones survive?

A Borg Queen Ship hurtles aimlessly through space, warping from system to system, apparently unable to find what it seeks. With this ship posing no threat, fortune-seekers are hungry to capture it and make use of its advanced technologies. But when it becomes clear that there are inactive Borg drones aboard who will die if the ship is dismantled, stripping it for parts becomes a moral quandary. Will you support those seeking to make a profit, or do whatever is necessary to save the drones?