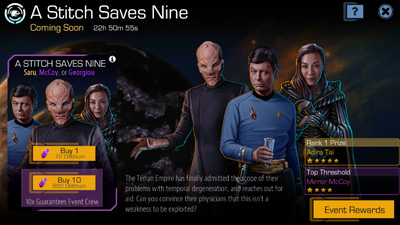 The Terran Empire has finally admitted the scope of their problems with temporal degeneration, and reaches out for aid. Can you convince their physicians that this isn't a weakness to be exploited?

A Stitch Saves Nine is the third of 4 events in the Mega Event The Cosmic Divide.

Faction mission details can be found in the A Stitch Saves Nine Faction Missions page.

Before you can delve too deeply into Mayweather’s tip that Zareh might have some inside help from the Terran Empire, the Empire itself begs for your aid. Their medical facilities are overwhelmed with individuals suffering temporal degeneration.