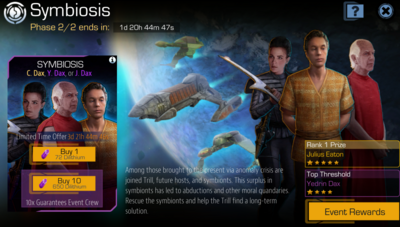 Among those brought to the present via the anomaly crisis are joined Trill, future hosts and symbionts. This surplus in symbionts has led to abductions and other moral quandaries. Rescue the symbionts and help the Trill find a long-term solution.

The first phase functions as a Skirmish Event, in which players can complete groups of Space Battles to receive Victory Points, which unlock Threshold Rewards.

The second phase functions as a Faction Event, with players completing shuttle missions for the Federation, Augments and Borg.

(Note on threshold rewards: number of Karemma Ship schematics will not display correctly here. Template is duplicating the amount for The Artifact schematics. This is a common problem for threshold rewards that contain two different schematics in the same reward tier. Correct amounts are in page source: 50, 150 and 250.)

The temporal anomaly crisis has brought many joined Trill to the present. This presents a new challenge, as the surplus of joined Trill also means access to more symbionts than many are used to. That access is proving too powerful a temptation for a select number of individuals, who will do whatever it takes to seize a symbiont, particularly one from the future with centuries of advanced knowledge. Rescue the abducted Trill and bring harmony back to the present! [1]