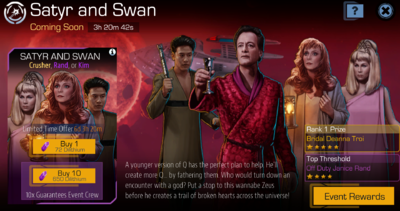 A younger version of Q has the perfect plan to help. He'll create more Q... by fathering them. Who would turn down an encounter with a god? Put a stop to this wannabe Zeus before he creates a trail of broken hearts across the universe!

Satyr and Swan is the first of 4 events in the Mega Event Q's Passion.

A younger version of Q declares his intention to make more Q to help in the temporal anomaly crisis by romancing and mating with species across the galaxy. Both the present Q and Starfleet officers who have been influenced romantically by stronger beings in this way are opposed to letting a real-life version of Zeus run amok. The younger Q’s plans must be stopped before they even start!