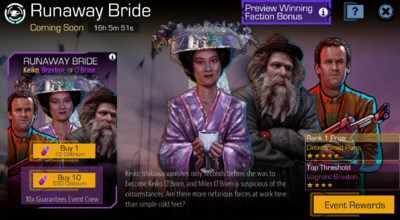 Keiko Ishikawa vanishes only seconds before she was to become Keiko O'Brien, and Miles O'Brien is suspicious of the circumstances. Are there more nefarious forces at work here than simple cold feet?

Runaway Bride is a Faction Event beginning Thursday, May 21, 2020 and ending Monday, May 25, 2020. Players can complete shuttle missions for the Bajorans, Section 31, or the Terran Empire. These missions will drop Victory Points, which unlock Threshold Rewards.

The latest victim of the temporal anomaly crisis is Keiko Ishikawa, only seconds before she was to become Keiko O’Brien. Just as quickly, she vanishes again, claiming to be overwhelmed after learning of everything her future holds. [1]