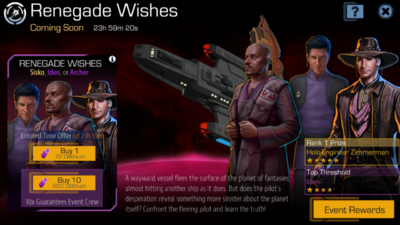 A wayward vessel flees the surface of the planet of fantasies, almost hitting another ship as it does. But does the pilot's desperation reveal something more sinister about the planet itself? Confront the fleeing pilot and learn the truth!

Renegade Wishes is the second of 4 events in the Mega Event Fantasy Planet.

A ship docked on the planet’s surface takes off in a hurry - leaving its crew behind! All hails are ignored, but it’s clear whoever is piloting the vessel is inexperienced when they narrowly miss striking another ship just dropping out of warp. Intercept the ship, find out the identity of the thief, and return it in one piece!