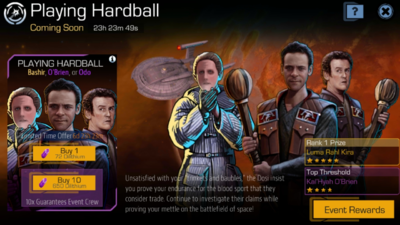 Unsatisfied with your trinkets and baubles, the Dosi insist you prove your endurance for the blood sport that they consider trade. Continue to investigate their claims while proving your mettle on the battlefield of space!

Playing Hardball is the second of 4 events in the Mega Event Ends and Means.

Unsatisfied with the “trinkets and baubles” you gathered previously, the Dosi demand that you demonstrate you’re serious about bartering with them, and prove your endurance for negotiation. As Starfleet officers do their best to impress the Dosi, Odo begins to suspect the Dosi may be up to something more nefarious, and wants to find proof this promised “cure” for the temporal anomaly crisis actually exists.