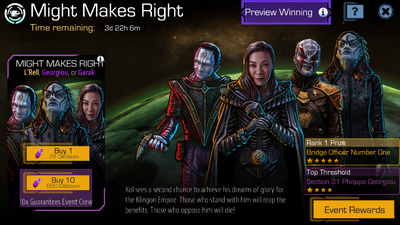 Kol sees a second chance to achieve his dreams of glory for the Klingon Empire. Those who stand with him will reap the benefits. Those who oppose him will die!

Might Makes Right is a Faction Event which ran from Thursday, January 31st through Monday Febuary 4th. Players could complete shuttle missions for the Klingon Empire, the Klingon-Cardassian Alliance or Section 31. In addition to normal shuttle rewards, these missions dropped Victory Points, which unlocked Threshold Rewards.

Might Makes Right was the First of 4 events in the Mega Event Empire Reforged.

A communication from Kol of House Kor reaches all vessels in the area: he declares his disgust at what the Klingon Empire has become. No longer a distinguished entity consisting of only the best and brightest, he sees the Empire as a shadow of its former self and intends to seize control and blaze a path forged by power in the name of the House of Kor. [1]