For the second run of this event, see Fireside Stories 2. 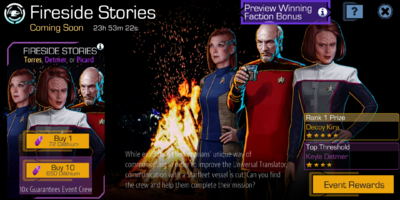 While evaluating the Tamarians unique way of communicating in order to improve the Universal Translator, communication with a Starfleet vessel is cut. Can you find the crew and help them complete their mission?

Fireside Stories was a Faction Event beginning Thursday, May 9, 2019 and ending Monday, May 13, 2019. Players could complete shuttle missions for the Klingon Empire, the Federation , or the Borg. These missions will drop Victory Points, which unlock Threshold Rewards.

B’Elanna and her shipmates explore the Delta Quadrant in the Delta Flyer but their efforts are hindered by the universal translator’s inability to handle certain language types. [1]