For the first run of this event, see Faster Future 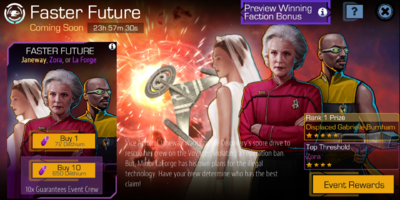 Vice Admiral Janeway wants to use Discovery's spore drive to rescue her crew on the Voyager, violating a Federation ban. But Mirror La Forge has his own plans for the illegal technology. Help your crew determine who has the best claim!

Faster Future 2 was a Faction Event beginning Thursday, May 7, 2020 and ending Monday, May 11, 2020. Players could complete shuttle missions for the Federation, the Terran Empire, or the Borg. These missions will drop Victory Points, which unlock Threshold Rewards.

Vice admiral Janeway sees the temporal anomaly crisis as an opportunity; this time she can go back and get Voyager home even faster--using Discovery’s spore drive! [1]