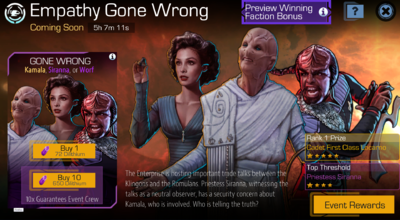 The Enterprise is hosting important talks between the Klingons and Romulans. Priestess Siranna, witnessing the talks as a neutral observer, has a security concern about Kamala, who is involved. Who is telling the truth?

Empathy Gone Wrong is a Faction Event beginning Thursday, November 21, 2019 and ending Monday, November 25, 2019. Players can complete shuttle missions for the Federation, the Klingon Empire, or the Romulan Star Empire. These missions will drop Victory Points, which unlock Threshold Rewards.

The Enterprise has arrived for an important set of peace talks between the Federation, the Romulans, and the Klingons. Captain Picard, who is entertaining Kamala as a personal guest, is preparing to lead the negotiations. [1]