They Came from the Holodeck 2 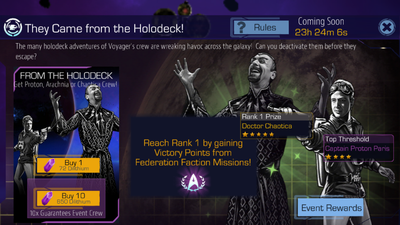 The 9th event offered in Star Trek Timelines, They Came from the Holodeck 2 will run from 12:00 PM (EDT) Thursday, July 28th, 2016 through 12:00 PM (EDT) Monday, August 1st, 2016. This event offers a Special Pack that has a guaranteed drop of Doctor Chaotica, Arachnia Janeway, or Captain Proton Paris if you spend 650

The event is based around shuttle missions. All Federation Faction Missions during the event drop Victory Points. Victory Points unlock Threshold Rewards, and improve your rank on the Leaderboards.