The Miracles They Deserve 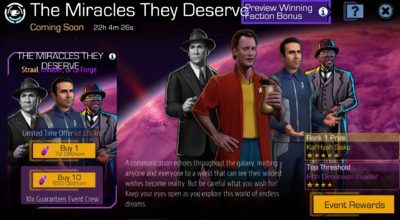 A communication echoes throughout the galaxy, inviting anyone and everyone to a world that can see their wildest wishes become reality. But be careful what you wish for! Keep your eyes open as you explore this world of endless dreams.

The Miracles They Deserve was a Faction Event beginning Thursday, October 7, 2021 and ending Monday, October 11, 2021. Players could complete shuttle missions for the Borg, Federation or the Klingon Empire. These missions will drop Victory Points, which unlock Threshold Rewards.

The Miracles They Deserve is the first of 4 events in the Mega Event Fantasy Planet.

Faction mission details can be found in the The Miracles They Deserve Faction Missions page.

Q invites dreamers, seekers, and the dissatisfied to visit a pleasure planet that would rival and even surpass Risa. However, it quickly becomes apparent that all is not as it seems and this world is far from the innocent fun Risa is heralded for. Visit the planet, try to uncover its mysteries, and locate some individuals who have gone missing there.[1]