The Heart of the Empire 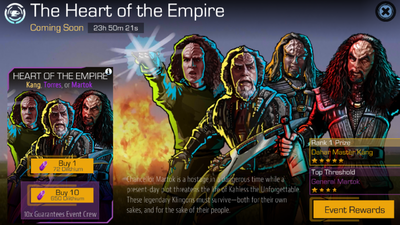 Chancellor Martok is a hostage in a dangerous time while a present-day plot threatens the life of Kahless the Unforgettable. These legendary Klingons must survive–both for their own sakes, and for the sake of their people.

The first phase functions as a Faction Event, with players completing shuttle missions for the Klingon Empire. These missions will drop Victory Points, which unlock Threshold Rewards.

The second phase is in the form of an Expedition Event.

The Heart of the Empire Faction Missions

All missions take place at Qo'noS.

The missing Chancellor Martok is being held hostage not in another place, but in another time. Travel back in time to rescue Martok without disrupting the events of the past, and discover his captors’ identity. Back in the present, he asks you to stop a plot that threatens not only the stability of the Empire, but also the life of Emperor Kahless himself. Join Dahar Master Kang and the most legendary of all Klingons in facing the would-be assassins! [3]