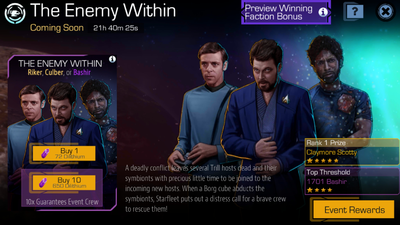 A deadly conflict leaves several Trill hosts dead and their symbionts with precious little time to be joined to the incoming new hosts. When a Borg cube abducts the symbionts, Starfleet puts out a distress call for a brave crew to rescue them!

The Enemy Within is a Faction Event beginning Thursday, March 12, 2020 and ending Monday, March 16, 2020. Players can complete shuttle missions for the Federation, the Augments, or the Hirogen. These missions will drop Victory Points, which unlock Threshold Rewards.

This event did not follow the pattern of previous ones, having two 5* featured crew and only one 4* featured crew, with the ranked 4* reward (Holonovel Doctor) being bonus crew for the following event. This was announced as being a one-off.[1]

The Enemy Within Faction Missions

A deadly space battle has left several joined Trill hosts dead and their symbionts with precious little time to find new hosts! The symbionts have been taken to the nearby Science Station Tango Sierra, but they aren’t the only visitors... [2]