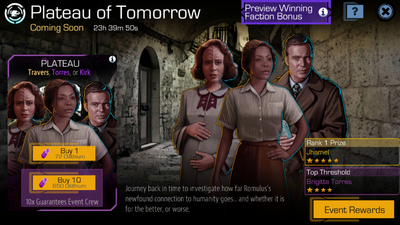 Journey back in time to investigate how far Romulus's newfound connection to humanity goes... and whether it is for the better, or worse.

Plateau of Tomorrow was a Faction Event beginning Thursday, August 20, 2020 and ending Monday, August 24, 2020. Players could complete shuttle missions for the Dominion, the Terran Empire, or the Klingon Empire. These missions will drop Victory Points, which unlock Threshold Rewards.

Plateau of Tomorrow is the second of 4 events in the Mega Event The Capitoline Wolf.

Following the shocking revelation that the Neutral Zone site was, in fact, a Romulan-Human settlement dated before First Contact, an away team attempts to travel back in time to explore whether Earth’s past has been altered.