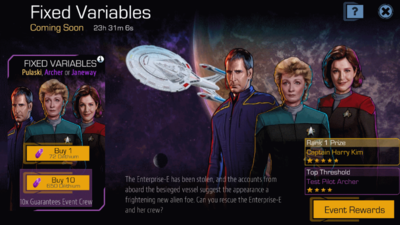 The Enterprise-E has been stolen, and the accounts from aboard the besieged vessel suggest the appearance a frightening new alien foe. Can you rescue the Enterprise-E and her crew?

The Enterprise-E, which was on its way to Archer and a group of temporal physicists to study the effects of temporal wakes, was attacked and stolen. Help Archer get it back! [1]