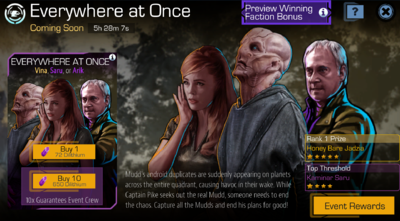 Mudd's android duplicates are suddenly appearing on planets across the entire quadrant, causing havoc in their wake. While Captain Pike seeks out the real Mudd, someone needs to end the chaos. Capture all the Mudds and end his plans for good!

Everywhere At Once was a Faction Event which ran from Thursday, October 24th, 2019 through Monday, October 28th. Players could complete shuttle missions for the Augments, the Cardassian Union or the Terran Empire. In addition to normal shuttle rewards, these missions dropped Victory Points, which unlocked Threshold Rewards.

Everywhere At Once was the fourth of 4 events in the Star Trek: Discovery Mega Event Mudd Amuck.

Everywhere At Once Faction Missions

Calls begin to swarm in about various versions of Harry Mudd suddenly appearing around the galaxy and attempting to steal valuable items. [1]