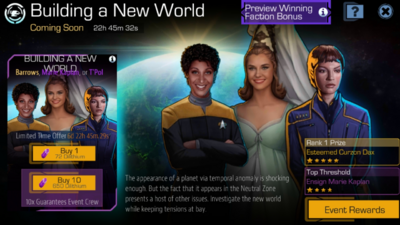 The appearance of a planet via temporal anomaly is shocking enough/ But the fact that it appears in the Neutral Zone presents a host of other issues. Investigate the new world while keeping tensions at bay.

Building a New World was a Faction Event beginning Thursday, March 17, 2022 and ending Monday, March 21, 2022. Players could complete shuttle missions for Section 31, the Maquis or the Romulan Star Empire. These missions will drop Victory Points, which unlock Threshold Rewards.

Faction mission details can be found in the Building a New World Faction Missions page.

The temporal anomaly has brought something rather shocking to the present - a planet! On top of that, the planet has appeared in the Romulan Neutral Zone, setting the Romulan Star Empire on high alert. Unravel the secrets of this brave new world.