For the second run of this event, see Barren Heat 2 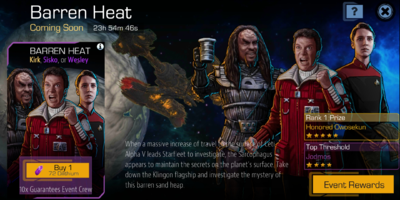 When a massive increase of travel to the surface of Ceti Alpha V leads Starfleet to investigate, the Sarcophagus appears to maintain the secrets on the planet's surface. Take down the Klingon flagship and investigate the mystery of this barren sand heap.

Ceti Alpha V has seen more visitors in the past month than it has in a century and this arouses suspicion within Starfleet. [1]