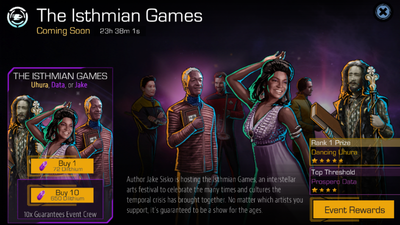 Author Jake Sisko is hosting the Isthmian Games, an interstellar arts festival to celebrate the many times and cultures the temporal crisis has brought together. No matter which artists you support, it's guaranteed to be a show for the ages.

An elder version of Jake Sisko, no longer haunted by the ghost of his lost father, has turned his efforts towards celebrating the artistic benefits of so many different peoples, cultures, and eras trapped together in the same space. He has organized an intergalactic arts festival and competition known as the Isthmian Games. Several factions, also seeking a breath of fresh air, have amped up the competition by sponsoring their favored art form. Who will win the Isthmian Games, and take home the prized replicated wreath of celery?[1]