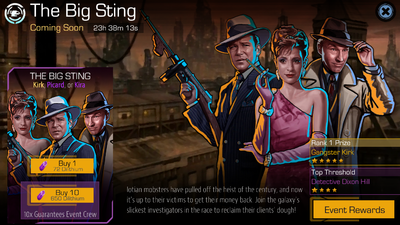 Iotian mobsters have pulled off the heist of the century, and now it's up to their victims to get their money back. Join the galaxy's slickest investigators in the race to reclaim their clients' dough!

The Bank of Bolias has been robbed (again) in the biggest heist of any known timeline, leaving its vaults empty and its clients frantic. These clients have hired some of the sharpest investigators and toughest muscle in the galaxy to get their money back from the gangster-like Iotians, who are more than ready to put up a fight. The Bajorans are willing to negotiate, but the Maquis are already planning a heist of their own, and the Romulans won’t hesitate to use force to get back what’s theirs. [1]