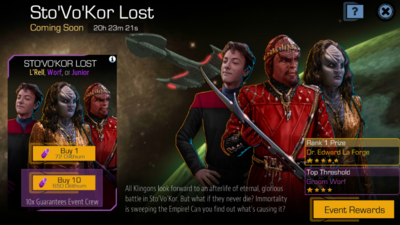 All Klingons look forward to an afterlife of eternal, glorious battle in Sto'Vo'Kor. But what if they never die? Immortality is sweeping the Empire! Can you find out what's causing it?

Klingon warriors across the universe are suddenly finding they cannot die: they have become immortal! While there are many who revel in the concept of eternal conquest and glory upon this plane, many others feel deprived at the loss of their long-promised eternal reward. Who or what has caused this, and what will it take to reverse?