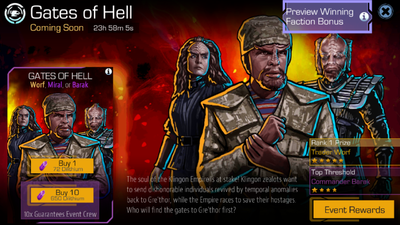 The soul of the Klingon Empire is at stake! Klingon zealots want to send dishonorable individuals revived by temporal anomalies back to Gre'thor, while the Empire races to save their hostages. Who will find the gates to Gre'thor first?

The Klingon Empire has been dishonored. Fearing for the souls of their people, a group of Klingon zealots seek the entrance to Gre’thor, the Klingon hell. Once there, they hope to restore honor to the Empire by forcing those who should be dead and burning in Gre’thor (but thanks to the temporal anomaly crisis, are alive and well) back inside. But these zealots are making their own determinations of who has been dishonored enough to go to Gre’thor, in many cases taking innocent people (or, in their stead, their loved ones) hostage. Can you find Gre’thor before they do? [1]