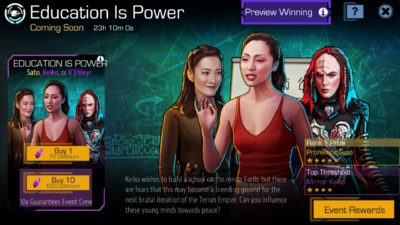 Keiko wishes to build a school on the mirror Earth, but there are fears that this may become a breeding ground for the next brutal iteration of the Terran Empire. Can you influence these young minds towards peace?

Having escaped from slavery and settled back on Earth, Mirror Keiko has opened a school, as her prime universe counterpart did on Deep Space Nine. But there are many concerned over what could happen if remnants of the Terran Empire make attempts to return to normal. Hoshi Sato, once a teacher herself, suggests that Keiko take some cues from the Federation and their system of education, in an attempt to subtly guide her away from the more brutish principles of the past. [1]